A marriage contract (Ketubah) is traditionally written in Aramaic. In Orthodox Judaism, it provides safeguards for the woman. In it, the husband guarantees nourishment, a healthy life and happiness to his wife. The Ketubah also arranges for the financial security of the wife in case of her husband’s death or divorce. In modern Jewish trends, a Ketubah is used to provide assurances for both partners – as well as a space for expressions of mutual love. 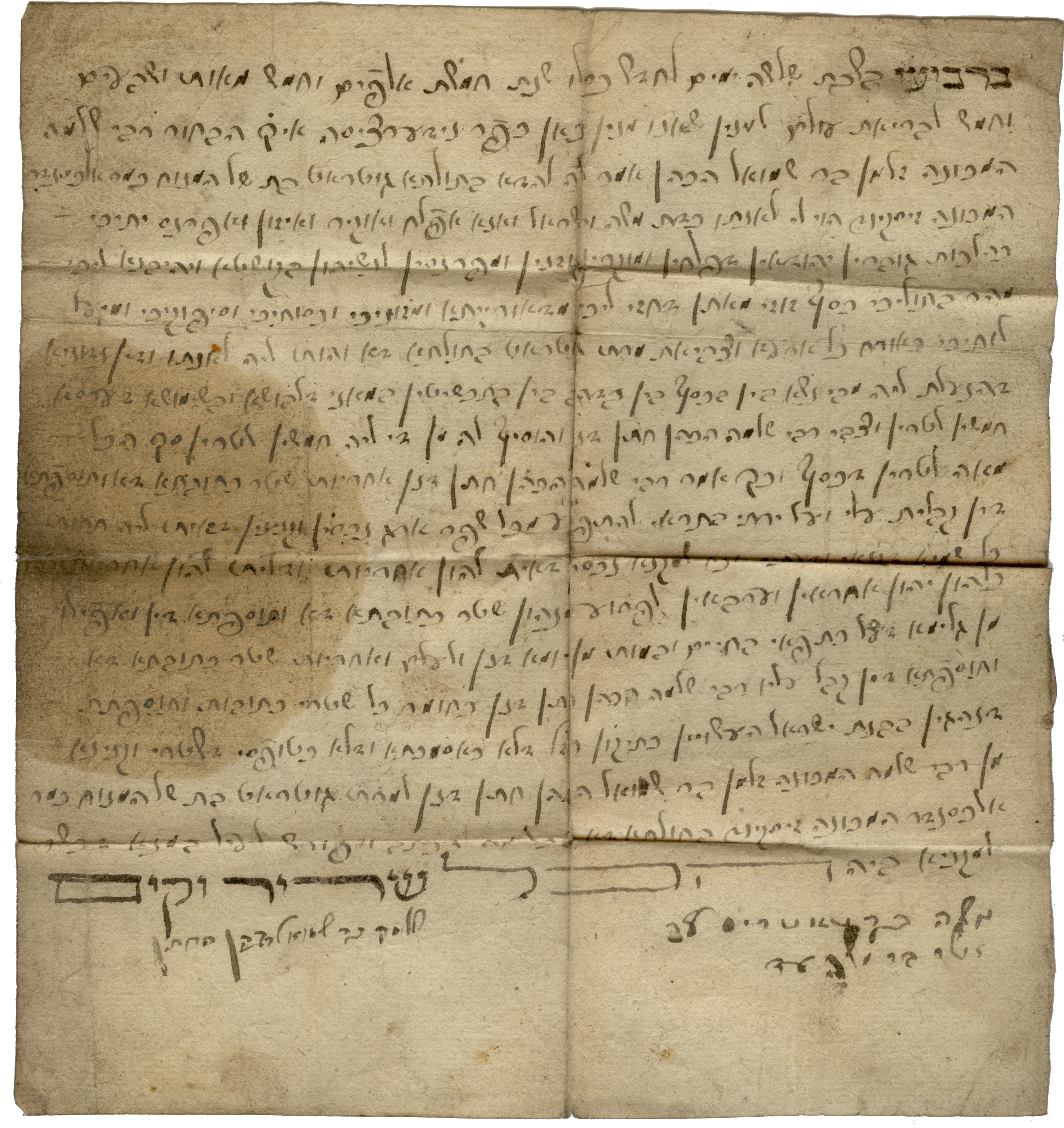 This marriage contract is one of five preserved in the Genizah. It was issued December 11th, 1814 in Niederzissen by Rabbi Schlomo, called Zalman, son of Schmuel ha-Kohen. His bride Gutrat, daughter of a deceased Mister Alexander (called Süsskind), is an orphan. Alongside the wedding vows, which the pair exchange in the presence of two witnesses, it is tradition even today to have the marriage contract signed by those witnesses as well. Signing here are Mosche bar Totris and – as far as it can be deciphered – Mosche bar Asher.

Usually, a Ketubah is written on high-quality paper in block letters, with some ornamental elements on the sides. The example shown here lacks these decorations and is written on more basic paper in cursive – possibly because Rabbi Schlomo had commissioned a non-professional scribe with creating the Ketubah or because the document had to be drawn up with great haste.

On the fourth day after Shabbat, third day of the month Kislev, in the year five thousand and five hundred and seventy and five after the creation of the world and with the count we use in the village of Niederzissen, I, bachur (unmarried) Rabbi Shlomo, named Zalman bar Shmuel ha Kohen, talked to that virgin Gutrat, daughter of the dead Mr. Alexander, who is also named Süsskind: Be my wife after the law of the Moshe and Israel. And I will work for you, honor you, feed and take care of you […] and also Ms.Gutrat, the virgin, agreed to be his wife; and concerning the dowry (nedunya), which she brought from her father’s house, be it silver, be it gold, be it jewelery, be it clothes, be it bedding (worth) fifty Litrin. And Rabbi Shlomo ha Kohen, the groom, agreed to add such a sum of fifty litrin for her. […]

Everything is certain and legally valid!