In European synagogues and prayer rooms, prayers are traditionally directed eastwards, facing Jerusalem – where the Holy Temple stood until 70 CE. Because of this, the Torah ark is placed on the eastern wall in all Jewish places of worship. If some members of the congregation or an entire group are in a room without a Torah ark, the direction facing east is indicated using a so-called Mizrah sheet or tablet (Mizrah being Hebrew for “east”). The tradition is derived from Dan. 6:11. Artistically crafted Mizrah sheets can be found since the Middle Ages. 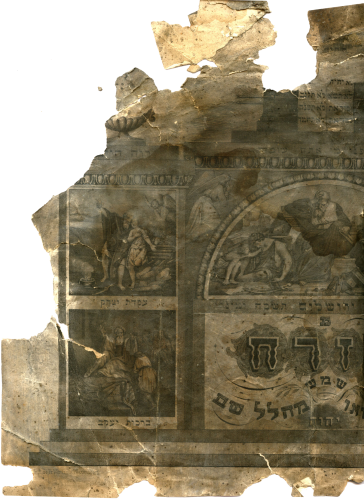 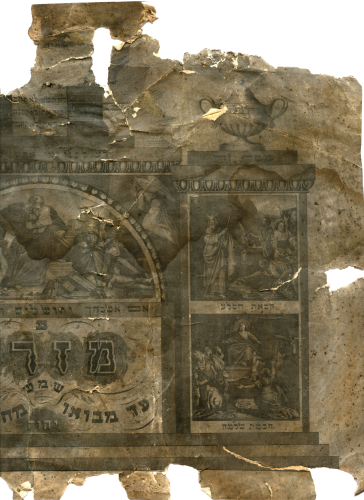 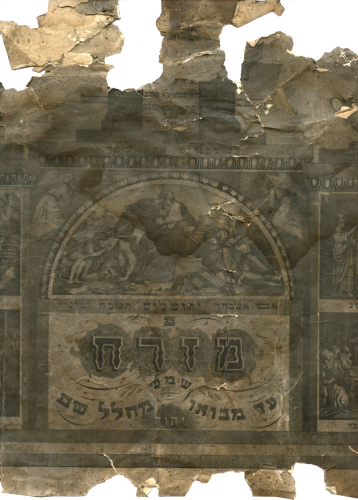 This lavishly decorated Mizrah sheet is one of the few artistic prints found in the Genizah. Architectural elements structure the sheet. The Hebrew lettering “Mizrah” forms the center of the sheet, surrounded by illustrations of biblical themes as well as allusions to the Temple of Jerusalem. On the upper edge of the image, the Ark of the Covenant and the tablets containing the commandments can be seen. Beneath them the quote “Know before whom you will ultimately give judgement and accounting” (Pirkei Avot 3:1) is printed. Further below, beneath the round arch, mourning people are seen sitting in a field of debris. They represent the accompanying verse of psalm 137:5: “If I forget you, O Jerusalem, let my right hand forget its skill!”. To both sides of them, well-known scenes from the bible are depicted, including king Solomon. This print appears to have been rather popular at the time, as it has been found in other cities as well.