Kabbalah is the best-known tradition in Jewish mysticism and is based on centuries of oral and written tradition. Its origins lie in the Holy Scriptures of Judaism (the Tanakh). Kabbalah deals with fundamental issues of human existence: Why do we exist, where do we come from and where do we go after our earthly existence comes to an end. It considers itself a method by which humans can achieve a higher consciousness and spirituality. 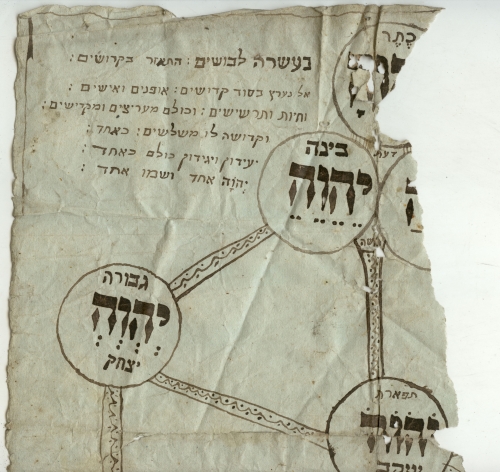 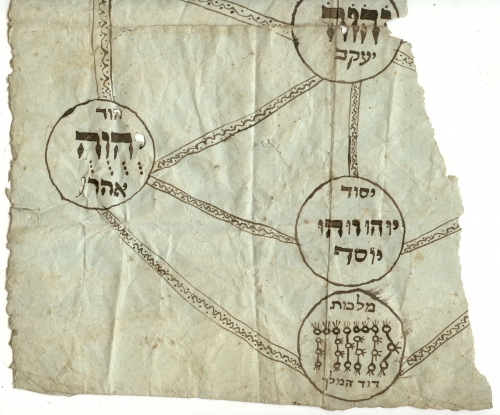 The illustration shown here allows a glimpse into domestic family piety amongst the Jews of Niederzissen. It attests to the fact that the Kabbalah was also studied in rural areas. On the partially torn sheet, the left half of a cabbalistic Sefirotic Tree can be identified. Such World Trees (or Trees of Life) are used both for study and meditation. They illustrate the ten so-called Sefirot, which symbolize all the interconnected divine emanations. But in addition to representing the inner workings of God, they also reflect the structure of all worlds. Therefore, from the viewpoint of the Kabbalah, the World Tree depicts the entirety of the universe, including earthly existence. In consequence, Kabbalists hold the belief that mankind is influenced by holistic universal forces – but can in turn influence them himself.
The Sefirotic Tree has also had a considerable impact on gentile esoteric traditions. A recent and prominent example can be found in the Umberto Eco novel “Foucault’s Pendulum”, which is divided into segments following the division of the Sefirot.